How the Mr. Popped the Question!

Hi all! I’ve decided to link up to MamaM. and be part of her Valentine’s Day Extravaganza week, and today is all about the story of how the Mr. proposed. Make sure you check out blog hop central to see other people’s stories. I could use a happy memory today, so here goes!

So to back up a bit, I packed up my car with a few belongings and drove out to Colorado on 12.01.04, supposedly on vacation to visit a girlfriend from college for a few weeks. Well, that turned into a few months… and during those couple of months, I met him.
See, I’d moved away from Minnesota because it felt like all of my friends were doing the Midwest American Dream thing. You know the one – go to college, meet the love of your life, get engaged, graduate, get married, get pregnant, settle down…and if you weren’t doing it, people thought you were crazy.
Admittedly, that was all stuff I wanted during college (I dated the same guy for three of the four years)…but when that relationship ended, I needed to get the hell out of Dodge so I enrolled in the semester abroad program and moved to France for six months to finish school over there and be as far from my ex and his new fiance as possible.
Best. Decision. Ever.
When I moved back from France, I decided that my travels weren’t over, so I packed up my car and moved to Colorado…supposedly to kill time until graduate school started in Arizona the next fall. Thunderbird University – here I come! I had my Bachelor’s in International Business & was fluent in French. The world was my oyster…or something like that.
Well, I met him and everything changed. I’m not saying I knew instantly he was the one – not at all. In fact, I kind of fought it. I did not want to settle down in a tiny ass town in the middle of nowhere. That was what I had just left behind in Minnesota for goodness sakes!
Fast forward a couple of years… it’s the fall of 2007…I’ve “postponed’ grad school to give a future with this guy a chance…but now it’s been 2 1/2 years of dating and he is not seeming interested in moving to that next level. See, Coloradans are nothing like Minnesotans when it comes to marriage – nearly everyone I knew in CO was single, living life the fullest, chasing a dream, etc… marriage and kids was for their 30s – not their 20s!

Holy shit, I’m Minnesotan after all. I was 25 and in love and craving being married, having a child, and a “family.” My message to him became something along the lines of shit or get off the pot. Quite honestly, I was pretty afraid he’d choose Option #2.

I was headed to MN for Thanksgiving, and I was just sure that if he was going to propose, it was going to be before then so I could surprise my family & friends. Nope. Now it’s Friday, November 30th, and I just had a horrid day at work. I’m hungover. I’m tired. I’m cranky. I don’t have a single romantic thought in my brain.
When I walk up the sidewalk at 5:15, he opens the front door for me (random, but not totally out of the question) and as I walk in, he says,
“Scrabble babe, Scrabble?”
We were playing a lot of Scrabble at that time, and that’s how he’d always ask if I wanted to play, but um, hell no I’m not in the mood for Scrabble, so I sigh and start to shake my head.
He repeats himself. “Scrabble babe, Scrabble?” … and looks down at the board laid out on the coffe table next to us. I get my wits about me and follow his eyes… 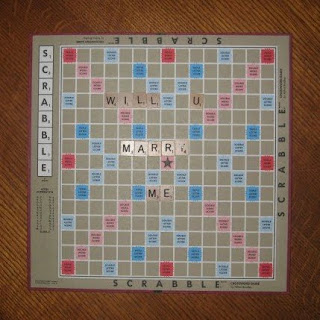 He finally says something along the lines of “I love you will my whole heart; will you marry me?”(much longer than this but neither of us can remember what was said) … and I’m in such shock and delirium and just nodding yes and crying and hugging him and kissing him and he finally says, “Well, do you want the ring or not?”

Um, YES. I had totally forgotten about the ring. Holy crap I had an engagment ring!

I know it’s cheeseball, but it was honestly one of the best days of my life. He LOVED me. He wanted to MARRY me. Mr. Commitment-phobe had just got down on one knee and completely surprised me by picking Option #1 and proposing. It was perfect!

I found out later that the “flue doctor” had come by a few minutes before that to do his annual inspection on our wood stove and the Mr. was all HELL NO, I’m getting ready to propose. You need to LEAVE. The Flue Doctor was trying to convince him that it would just take a couple of minutes, and Hubby was all, You do not get it, I am proposing in 5 minutes when my girlfriend walks in that door and you will NOT be here. You need to leave, NOW.

We never did get the stove checked out that year. Oops. 🙂 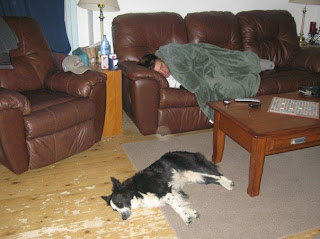 At any rate, my poor boy had chugged a couple beers waiting for me to get home b/c he was so nervous and by the time I got home and said YES and we went out for dinner, he was BEAT. I took this pic of him and our dog absolutely crashed out in our living room at 8:30pm. 🙂
I’m the luckiest girl in the world…

**EDIT**
I just had to add that he DID ask my Dad for permission a few days before, which was uber uber important to me, and exteremly impressive considering my parents live 1000+ miles away and he NEVER talks to my Dad on the phone. My parents were pretty darn excited to know about the whole thing before me. 🙂