Thank you SO MUCH for all of the encouraging words yesterday. That wait until 4pm was a killer, but I am so glad that my hubby was able to be there with me.

Without further ado, we have a heartbeat!!!!


Absolutely surreal. That’s all we were both thinking. My ultrasound tech is SO great, and she immediately tells you what she’s seeing and doing. Right away she told showed us the embryo and the yolk sac and said it implanted high in the uterus – “just what they like to see.”

Based on the IUI date (March 31st), I was 6w4d yesterday. The tech said the baby measured 5.4mm (apparently the equivalent of 6w3d), which she said was just great. The heart beat was fluttering away at 134bpm. Wow. Just…wow. 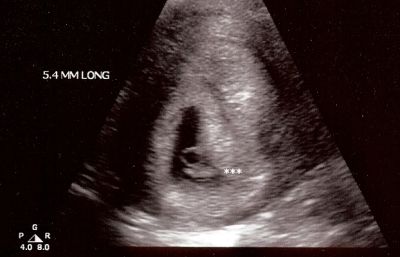 She told me that in the pic above, the three stars *** are just to the right of the baby (which is laying horizontal in the pic), and that the circle above is the yolk sac. Does that sound right? It was crazy to actually see the heart beating on the screen. The whole time I just had tears streaming down my face and was grabbing Charlie’s hand so tightly.

I can’t believe that we’re finally going to be parents. Wow. I pray every day and night that this is a healthy pregnancy that leads to a healthy baby. There is definitely a whole different level of fear involved now!

I called today and set up an appointment with the nurse midwives at my local hospital. I’d honestly prefer a home birth, but my hubby is pretty anti-that idea, so we’re trying to find a compromise. It’s set up for next Monday – I’ll let you know how it goes! I’ll also my my P4 level drawn next Monday, and assuming all is well, I’ll start to wean off the prometrium supplements after that.

I meant to catch up on some blogs right now while I was at the office, but I’m currently feeling more and more like vomiting, so I think it’s time to run and find some crackers before that happens. Yikes. Let the good times roll.

Virtual Hugs (FYI - your comment may be held in moderation for me to approve if you have never commented here before - I try to approve as quickly as possible!) Cancel reply

← Symptoms
Desperate →
Haven’t posted here in nearly a year. It’s time. Just finished a workout with my daughter - loved it!
8 weeks ago I decided to start focusing on my own health and wellness again. I’m so proud to say that I’m sticking with it, no matter the obstacles in my path. #progressnotperfection
Morning workout done thanks to Beachbody on Demand and chocolate/banana Shakeo for breakfast. It feels good to get back in the habit... #22daysuntilVegas
Finishing 13.1 miles strong yesterday! #halfmarathon